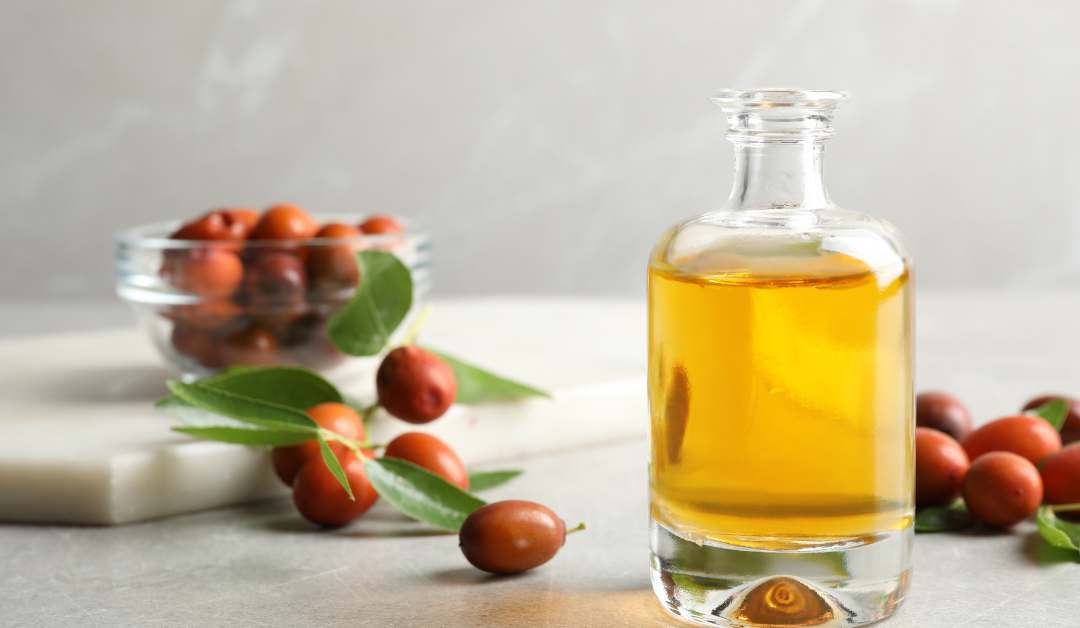 Prior to Argan oil, Jojoba Oil was called ‘Liquid Gold’, which could be from the beautiful golden colour that the oil has or because of its myriad of amazing uses on the hair and skin.

Jojoba Oil is said to be indigenous to the Sonoran Desert, which borders Mexico and the South West of North America. It was first discovered in North America where the Native Americans used it for cooking, hair care and treatment of issues such as poison ivy, sores and wounds. The seeds have also been used by the Natives to make a coffee substitute.

In the 1970s, it was researched, cultivated and found to be a great substitute for sperm whale oil. Due to its makeup, it was determined to have similar properties to the natural sebum produced in the skin, in addition, it has an extremely long shelf life, making it exceptionally valuable to the cosmetics industry.

Why is Jojoba Oil Good for Skin

Jojoba oil, being a liquid wax, is amazing for the skin as it provides a light film that maintains moisture, but allows the skin to breathe. It is compatible with the skin because it contains similar waxy esters to what the skin naturally produces in sebum. When applied to skin, it is non-greasy, doesn’t clog the pores and helps condition acne prone skin, making it a great addition to face creams and oil serums.

Why is Jojoba Oil Good for Hair

As good as Jojoba is for the skin, it is also amazing for your hair. It helps regulate the sebum on the scalp, filling in where the scalp doesn’t produce enough lipids or balancing out the overproduction of lipids so the body eventually slows down the overproduction.

When applied to the hair, it forms a light film which leaves the hair looking healthy with a natural shine. It absorbs in the hair, but does this very slowly, making it a great option for sealing in faster absorbing oils and water, helping them to maintain the hair’s moisture balance.

This oil is perfect for dry skin and hair. Being a native of the Sonoran Desert, and having to deal with extreme temperatures, it adapted by producing this oil which seals in the moisture of the tree protecting it from evaporation.

Jojoba Oil is very versatile,  a non comedogenic lipid that can be found in cleansers, face creams, body creams, hair oils and just about any cosmetic product. You can use it on its own or in combination with other oils. It can be quite pricey, but it’s one of those oils that doesn’t need a backup singer, it shines brilliantly on its own.

You’ll find Jojoba Oil in almost all our products because we think it’s an absolutlely fantastic ingredient. If you love Jojoba Oil as much as we do, share the love in the comments.

This website uses cookies to improve your experience while you navigate through the website. Out of these, the cookies that are categorized as necessary are stored on your browser as they are essential for the working of basic functionalities of the website. We also use third-party cookies that help us analyze and understand how you use this website. These cookies will be stored in your browser only with your consent. You also have the option to opt-out of these cookies. But opting out of some of these cookies may affect your browsing experience.
Necessary Always Enabled
Necessary cookies are absolutely essential for the website to function properly. This category only includes cookies that ensures basic functionalities and security features of the website. These cookies do not store any personal information.
Non-necessary
Any cookies that may not be particularly necessary for the website to function and is used specifically to collect user personal data via analytics, ads, other embedded contents are termed as non-necessary cookies. It is mandatory to procure user consent prior to running these cookies on your website.
SAVE & ACCEPT
0
0
Your Cart
Your cart is emptyReturn to Shop
Continue Shopping